Herr Alarich Wallenquist aka "the Kraut" is the mysterious and powerful German-American leader of the Basin City mob. His goal is merely to achieve power and profit, regardless of what underhanded methods are necessary. Unlike the other criminals, however, he does have a sense of honor, as he sees revenge as an unnecessary extravagance and will often take losses with a fair amount of dignity. During both of his rare appearances, it is seen that his face is characterized by heavy scars, burn wounds, or possibly some sort of skin disorder.

His dealings with the late Damien Lord were not satisfying because of Lord's dislike of extralegal operations. Months after his death, Ava Lord invited him to a party in her mansion.

Talking with Ava, Wallenquist revealed that he already knew Ava caused the death of two cops, Mort and Bob. He warned her that he had no use of her charms; he agreed to find Dwight and kill him, but the price would be far higher than her body.

He confirmed that their operations were in partnership and his agent would depart the next day from Phoenix to meet her. This dialogue was overheard by Gail who posed as waitress and subsequently tipped off Dwight.

Wallenquist's enforcer The Colonel operated the organization's organ harvesting and human trafficking ring. When the Colonel threatened the family of the corrupt Basin City Police Department commissioner Liebowitz, he pushed Liebowitz too far. Liebowitz spearheaded a sting operation and not only eradicated Wallenquist's "human resources division", but also executed The Colonel.

In response, Mariah addressed Wallenquist and prompted him to give the order to have Liebowitz (and also Wallace) murdered. Wallenquist surprised her by flatly refusing to pursue revenge... a "loser's game" with "no percentage in it". Willing to accept these recent losses, he asserted that Liebowitz would soon become useful to the mob again, and Wallace was better left untouched from then on.

Wallenquist is portrayed by Stacy Keach in the sequel. His first name is revealed to be "Alarich". Possibly a reference to the Marvel Comics villain of the same name. [1] 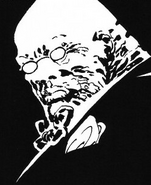 He speaks to Ava.

Speaking about the Old Town girls.