The Pits (officially the "Santa Yolanda Tar Pits") is a location outside Basin City that was first featured prominently in The Big Fat Kill and then numerous times after that.

A recently discovered series of tar pits, the Basin City government saw it as a way to capitalize on tourism and turned it into a park. After the release of a 'big budget dinosaur movie' (a probable reference to Jurassic Park) revived interest in dinosaurs and fossils, the Basin City government spent thousands of dollars rigging up impressive dinosaur statues. This proved to be successful until an elderly woman fell into a pit and had a heart attack from panic. The negative publicity shut down the Pits for good.

The Pits' commercial failure didn't stop Sin City's criminal element from finding a new use for them. Soon, it became the go-to place for dumping dead bodies, from Dwight McCarthy trying to hide the evidence of Jackie-Boy's death (The Big Fat Kill) to petite assassin Delia, who used it as a place to seduce her first official victim (Wrong Turn). 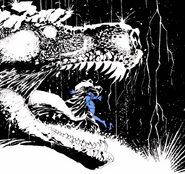 Delia and Phil at The Pits.
Community content is available under CC-BY-SA unless otherwise noted.
Advertisement