Stuka is a wisecracking —and extremely durable— henchman of Manute's who has a swastika tattooed on his forehead.

He was with Manute while Davis was torturing Gail in Old Town he was discussing with Schutz how much they admire his technique. Then he is impaled by an arrow shot by Miho with a letter attached written by Dwight, asking to set Gail free in exchange for Jackie Boy's head.

The henchmen were indifferent in Stuka's condition and all left the room for the transaction oblivious to his mutterings, when a second arrow from Miho penetrated his neck.

The second arrow goes through the back of his head, and pierces right through the swastika in his forehead, presumably killing him. 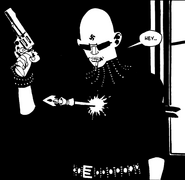 Stuka in the yarn.

Stuka is shot in the head with an arrow.
Community content is available under CC-BY-SA unless otherwise noted.
Advertisement