Sin City, also known as Frank Miller's Sin City, is a 2005 American crime thriller film written, produced and directed by Frank Miller and Robert Rodriguez. It is a neo-noir based on Miller's graphic novel series of the same name.

The movie is based on 4 stories from the Sin City universe including:

The Salesman (Josh Hartnett) walks onto a penthouse balcony where The Customer (Marley Shelton) looks out over Basin City. He offers her a cigarette and says that she looks like someone who is tired of running and that he will save her. The two share a kiss and he shoots her; she dies in his arms. He says he’ll never know what she was running from but that he’ll cash her check in the morning. Later, an injured Becky departs from a hospital, talking on a cell phone with her mother. In the elevator she encounters The Salesman, dressed as a doctor. He offers her a cigarette, calling her by name, and she abruptly ends the call with her mother.
On the docks of Sin City, aging police officer John Hartigan (Bruce Willis) tries to stop serial child-killer Roark Junior (Nick Stahl) from raping and killing his fourth known victim, eleven-year-old Nancy Callahan (Makenzie Vega). Junior is the son of Senator Roark (Powers Boothe), who has bribed the police to cover up his son's crimes. Hartigan's corrupt partner, Bob (Michael Madsen) tries to convince Hartigan to walk away. Hartigan knocks him out.

Hartigan heads into the warehouse where Roark Junior is holding Nancy, fighting off the pain caused by his bad heart, as well as several henchmen. Junior shoots Hartigan in the shoulder and tries to escape. Hartigan catches up and shoots off Junior's ear, hand, and genitals. Bob, now recovered, shoots Hartigan in the back. As police backup approaches, Bob leaves and Nancy lies down in Hartigan's lap. Hartigan passes out, reasoning his death is a fair trade for the girl's life. Hartigan is recovering in a hospital when Senator Roark informs him that Junior is in a coma and the Roark legacy is in serious jeopardy. Hartigan will be framed for Junior's crimes; if he tells anyone the truth, they will die. A grateful Nancy promises to write letters every week while he is in prison.

Hartigan goes to jail, though he refuses to confess. He receives a weekly letter from Nancy, as promised. After eight years, the letters stop and he receives a severed finger instead. Hartigan confesses to all charges leading to his parole and searches for an adult Nancy (Jessica Alba), not knowing he is being followed by a deformed, yellow man. He eventually finds her at Kadie's Bar, where she has become an exotic dancer.

He realizes he was set up to lead the yellow man to Nancy and the two escape in Nancy's car. Hiding at a hotel, the deformed man returns, revealing himself as Junior Roark, disfigured by years of surgery to regenerate his body parts. Junior attacks Hartigan and takes Nancy to the Roark farm to finish what he started eight years before. Hartigan follows and fakes a heart attack, giving him a chance to kill Junior. Knowing that Senator Roark will never stop hunting them, Hartigan commits suicide to ensure Nancy's safety. Again, he justifies his life for Nancy's as a fair trade. Hartigan dies realizing that others will continue to kill off Roark family. And when they are all dead, Sin City will change.
After a one-night stand, Marv (Mickey Rourke) awakens to find Goldie (Jaime King) has been killed while he slept. He flees the frame-up as the police arrive, vowing to avenge her death. His parole officer, Lucille (Carla Gugino), warns him to give up on his mission, believing Marv may have imagined it all due to his "condition." Marv interrogates several informants, working up to a corrupt priest (Frank Miller), who reveals that the Roark family was behind the murder. Marv kills the priest after he insults Goldie but is then attacked by a woman who looks like Goldie, which he dismisses as an hallucination.

Marv goes to the Roark family farm and is subdued by the silent stalker who killed Goldie. He awakens in the basement to find Lucille has been captured after looking into his story. She tells Marv that the killer is a cannibal and that Goldie was a prostitute. He learns that the killer's name is Kevin (Elijah Wood) and escapes with Lucille. Lucille is gunned down by the leader of an arriving squad of corrupt cops, who are then killed by Marv, except for the leader, who he interrogates first. Marv finds out that Cardinal Patrick Henry Roark (Rutger Hauer) arranged for Goldie's murder.

Marv goes to Old Town, Sin City's prostitute-run red-light district, to learn more about Goldie and is captured by her twin sister, Wendy, who had been stalking him. He eventually convinces her that he is not the killer. She and Marv return to the farm where Marv kills Kevin. He confronts Cardinal Roark, who confesses his part in the murders. Kevin was the cardinal's ward; the two men ate the prostitutes to 'consume their souls'. Marv kills the cardinal but is then shot and captured by his police guards.

Marv is taken to a hospital where cops threaten to kill his mother to get him to confess to killing Roark, Kevin, and their victims. He is sentenced to death in the electric chair. Wendy visits him on death row and thanks him for avenging her sister. Marv is then executed.
Shellie (Brittany Murphy) is being harassed by her abusive ex-boyfriend Jackie Boy (Benicio del Toro). Her current boyfriend, Dwight (Clive Owen) violently warns him to leave Shellie alone. Jackie Boy and his men flee to Old Town. Dwight follows and sees them harass Becky (Alexis Bledel), a young prostitute. Gail (Rosario Dawson), the prostitutes' leader and Dwight's on-and-off lover, also witnesses the scene. When Jackie Boy threatens Becky with a gun, Miho (Devon Aoki), a martial arts expert, kills Jackie Boy and his friends. They then realize Jackie Boy is actually Detective Lieutenant Jonathan "Iron Jack" Rafferty of the Basin City police, considered a "hero cop" by the press. If the cops were to learn how he died, their truce with the prostitutes would end and the mob would be free to wage war on Old Town. Dwight takes the bodies to a tar pit, where he is attacked by an ex-IRA mercenary hired by mob boss Wallenquist. He nearly drowns in the tar before Miho saves him. The mercenary runs away in the sewer with Jackie Boy's severed head but Dwight and Miho are able to retrieve it and return to Old Town. Meanwhile, the head mercenary, Manute (Michael Clarke Duncan), kidnaps Gail. Becky has made a deal with the mob and has betrayed the prostitutes. The mob is moving to invade with Manute leading. Dwight trades Jackie Boy’s head in exchange for Gail, but activates an explosive he placed inside the head, destroying it before it can be taken to the cops for evidence. The other prostitutes gun down the mercenaries while an injured Becky escapes.

Only in Sin City do you wake up with a dead woman in your heart-shaped bed. 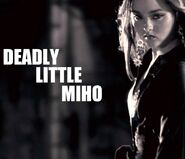 Looks can be deceiving.

A shot for the big man.

No air to breathe. Only the horrid oily tar taste creeping up my nostrils.

That wasn't Goldie back there. Goldie's dead.

The hell I send him to will seem like heaven after what I've done to him. 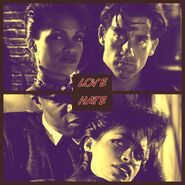 I'll sign my letters Cordelia. That's the name of a really cool detective in books I read.

The tools of sin.

Not a good street for Trick or Treating. 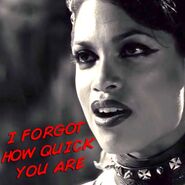 Shut up and keep your hands to yourself, or I'll cut your little pecker off.

Walk down the right back alley in Sin City and you can find anything.

Hell of a way to end a partnership.

A poster of Marv.

Jessica Alba is Nancy - Skinny little Nancy Callahan. She grew up. She filled out.

Skinny little Nancy Callahan. She grew up. She filled out.

The women of Sin City.

Marv on a Sin City wallpaper. 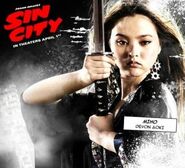 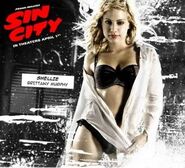 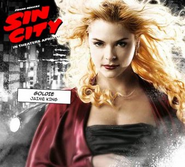 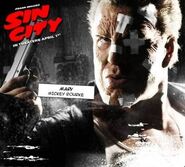 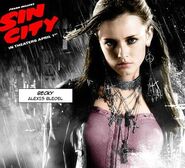 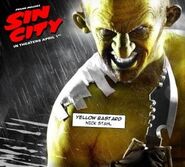 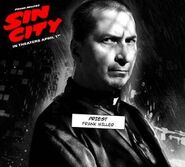 Frank Miller is the Priest.

Robert and Jessica.
Community content is available under CC-BY-SA unless otherwise noted.
Advertisement