Senator Ethan Roark Sr. is a rich, corrupt politician, who holds most of Basin City in his grip. These privileges are inherited by his son, Roark Junior. Senator Roark murdered his wife with a baseball bat, for which he was never arrested, even though (by his own admission) he left his fingerprints all over the crime scene. He also is the brother of Cardinal Roark; his other brother serves as an Attorney General (not featured).

Senator Roark hopes for his son to become President of the United States, but Junior presents a serious problem: he enjoys raping and murdering pre-pubescent girls. Senator Roark uses his police connections to cover up his son's crimes, but when Junior kidnaps 11 year-old Nancy Callahan, Detective John Hartigan shoots off Junior's ear, hand, and genitals with a .44 Magnum Smith & Wesson Model 29 revolver.

Senator Roark then visits Hartigan in the hospital, explaining that he actually has no intention of killing him. Instead, he plans to finance Hartigan's medical treatment to keep him alive; his ultimate plan is to frame Hartigan for Junior's crimes while Junior recovers from surgery. He then says that he will kill anyone to whom Hartigan tells the truth. Hartigan serves eight years in prison until he confesses to Junior's crimes, with the Senator personally appearing at his parole hearing. During these years, the Senator had recourse to alternative medicines and "Witch doctors" in order to heal his son and restore his reproductive organs and eventually obtain an heir for his dynasty.

By the end of the story, Hartigan kills Junior; he then commits suicide with a .44 Magnum Ruger Blackhawk revolver, rendering Senator Roark unable to have revenge. In his final narration, Hartigan mentions that the Roark family line is ended, the Senator's plans for a legacy now destroyed which completely angers Roark.

Johnny buys into the backroom poker game lead by the all-powerful Senator Roark. Johnny repeatedly wins in the high-stakes game, and cleans the senator out. Later, the Senator is waiting for him. In payment for the humilation he suffered at the card game, Roark takes back his money, then reveals a pair of pliers, which he uses to break three of Johnny's fingers. They toss him from the car and the Senator shoots him in the leg, at which point he reveals that he has recognized Johnny as his illegitimate son, but remarks that he only considered his dead son Roark Jr. (who was killed during the events of the first film) his flesh and blood. He leaves Johnny alive, preferring to let him suffer, and Johnny swears revenge. Later, Johnny flees to her hotel, but finds the Senator waiting for him along with Marcie's dismembered head and hands. Again, the senator lets him go. Intent on taking down Roark. Later, playing with significantly less confidence, Johnny folds his first few hands, allowing Roark, who taunts him about his dead mother. He is able to once again con Roark into going all in, and then reveals his winning hand. Johnny taunts his father, reminding him that the story of how he was beaten twice by the same man will follow him for the rest of his life. His vengeance completed, Johnny smiles resignedly as Roarke shoots him in the head, commanding his men to get rid of the body.

Nancy and Marv mount an assault on Roark's compound, and Marv brutally slaughters Roark's bodyguards while Nancy picks off the guards with a crossbow. Marv is wounded, and Nancy continues on to confront Roark by herself. Roarke shoots her several times and is about to finish her off when he is distracted by the ghost of Hartigan appearing in a mirror, which gives Nancy enough time to recover and shoot him dead.

His death is a case of retroactive continuity as in the first film, following Cardinal Roark's killing, a newspaper clipping shows "Senator Roark decries atrocity", at which point Marv would be held in custody awaiting trial.

Senator Roark was portrayed by Powers Boothe in the movie. The role was also offered to Christopher Walken and Willem Dafoe, who both turned it down.

Sin City: A Dame To Kill For

Powers Boothe reprised his role of Senator Roark in this film. 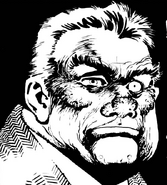 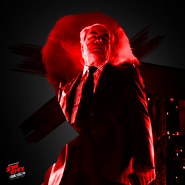 He rules Basin City with an iron fist.

Senator Roark is Watching You. 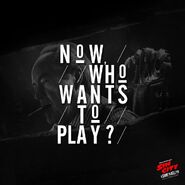 Roark is ready. Are you? 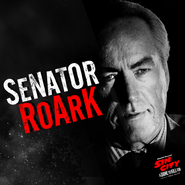 I'll do far worse than kill you, boy. 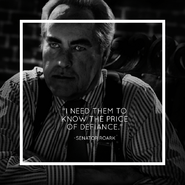 Welcome to Sin City, where corruption is king.

In The Long Bad Night.

Nancy spies on the senator.

He winks at Nancy.

Nancy and the Senator.

About to play a record.

The senator in Nacy's Last Dance.

Staring at a wounded Nancy.
Community content is available under CC-BY-SA unless otherwise noted.
Advertisement