Mariah is an assassin who works alongside Delia. She has a penchant for Leopard print clothing.

The Colonel suggests using Mariah to kill Eddie Dubois. However Delia says that Mariah is sloppy.

Mariah visits Fredric on the Colonel's orders and stabs Orrin with multiple Scalpels. Mariah stabs a needle into Fredric's eye in case he informs Wallace about The Colonel's operations. Mariah then breaks Josh's arm in order make Liebowitz help The Colonel. Wallace eventually fights Mariah at a Factory and breaks her nose. At the end of the story Mariah is seen with a bandage over her nose, advising Wallenquist to kill Wallace and Jerry. Wallenquist decides to let them live and says that Liebowitz will be of further use to him. 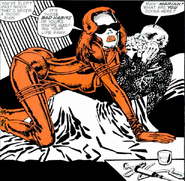 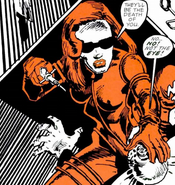 Attacking Fredric.
Add a photo to this gallery
Retrieved from "https://sincity.fandom.com/wiki/Mariah?oldid=11345"
Community content is available under CC-BY-SA unless otherwise noted.