Lucille is Marv's lesbian parole officer and partner of Claire; she kept him on sedatives for his 'condition'.

Lucille worked as Hartigan's parole officer. Realizing something was up, she urged Hartigan to fight the false rape and murder charges Senator Roark was pinning on him. She almost slugged him when he stopped her from hiring him an attorney, and slugged him when Hartigan refused to plead innocent, thinking he was saving Nancy Callahan's life and Lucille hated him for it.

Eight years later, Lucille came when Hartigan called; Lucille hoped that Hartigan would now plead innocent. She had Yuengling ready to take on his case pro bono and Gilleran of the Gazzette had six of his reporters. Hartigan stopped her, saying that he would have a confession so that he might go out.

Years later she would get a visit from Marv, asking her for sedatives. He told her he got into a fight with some cops. She tried to calm him down but realized he was pretty bad off; he was ready to go till the end, because it was not just a brawl like before, but something big. The bad old days were back.

After he left, Lucille was kidnapped by Kevin who took her to the farmhouse, knocked her out, and then cut off and ate her hand while forcing her to watch. He then threw her in the basement to stare at the 5 heads of the murdered and cannibalized prostitutes until Marv arrived.

Marv managed to break the door just as a chopper and a death squad led by The Painted man arrived. Afraid that he would get them both killed, Lucille knocked out Marv and took his gun. She then went to the alleged cops and explained Marv's situation and what the two of them just went through, hoping that they would see no need to kill him. Unfortunately for Lucille, the Painted Alleged Cop was actually a hitman who was there to kill Marv along with anyone else he had talked to. Lucille was blown away seconds later. 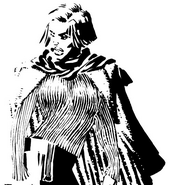 She gets her gun. 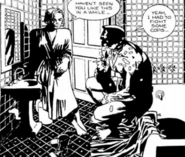 Arriving at the penitentiary.

Lucille, still in shock by Kevin.

Lucille in the basement.

Lucille looks down at Marv.

Upon surrendering.
Community content is available under CC-BY-SA unless otherwise noted.
Advertisement