Kadie's Saloon or Kadie's Club Pecos is a nightclub owned by Kadie, a place where the local residents of Basin City go to, for drinks and other things. A strip club/bar where Josie, Nancy Callahan and Shellie work, and Dwight McCarthy and Marv hang out.

Though filled almost solely with drunk and violent men, Kadie's bar is one of the safest areas in Sin City. Marv, who possesses an extraordinarily high sense of chivalry, protects the female employees of Kadie's from any violence that makes its way inside.

Ava asks Dwight to meet her at a seedy bar called Kadie's Club Pecos. Dwight is suspicious of her, as Ava broke his heart four years ago by running off with another richer man, but he agrees to meet her anyway.

Marv is also there and greets Dwight. Ava arrives late (as she often used to) and tries to persuade Dwight to take her back, claiming that her life is "a living Hell"; Dwight refuses to listen. Just then, Manute, Ava's husband's valet, arrives and takes Ava away. Dwight goes home, but cannot sleep. He decides to check up on Ava and her new husband, Damien Lord.

On the night John Hartigan met back up with Nancy, Marv found himself on a highway overlooking The Projects, surrounded by dead young guys, unable to remember how he got there. He lights one of the dead guys' cigarettes and thinks back; since it is Saturday, he deduces he must have been at Kadie's watching Nancy dance.

Johnny, a cocky young gambler, arrives in Sin City and heads to Kadie's place, where he imminently hits the jackpot on multiple slot machines. Taking a young waitress, Marcie with him as a good luck charm, he buys into the backroom poker game lead by the all-powerful Senator Roarke. Johnny repeatedly wins in the high-stakes game, and cleans the senator out. One of the other players, the corrupt police lieutenant Liebowitz  warns him to get out of town, but instead Johnny takes Marcie out for a night on the town.

Nancy attempts to shoot Roark from the stage of Kadie's, but finds herself unable to pull the trigger, possibly due to Hartigan's ghostly influence. Nancy hallucinates a visit from Roarke, and shortly thereafter cuts her hair and smashes a mirror, using its shards to cut her face. Having witnessed Nancy's downward spiral, Marv steps in and volunteers to help her kill Roarke.

Marv is there, watching Nancy as usual when Stan and another hit-man leads him outside.The kills the other man and shoots Stan so that he would talk about Goldie's killer. 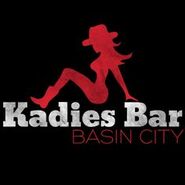 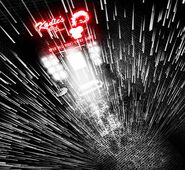 Are you coming to Kadie's Club for Sinful Sundays? (promotional image) 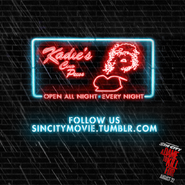 Kadie's is waiting. Stop by for a dance. (promotional image)

The bar as seen in A Dame To Kill For.

Kadie's as seen in Just Another Saturday Night.

The bar in That Yellow Bastard.

The bar in The Long Bad Night.

As seen in Nancy's Last Dance.
Community content is available under CC-BY-SA unless otherwise noted.
Advertisement