Not to be confused with Daddy's Little Girl's Johnny.

Johnny is a character seen in the original yarn The Long Bad Night first seen in Sin City:A Dame to Kill For. He is the illegitimate son of Senator Roark and an unnamed woman, whom Roark considers a "whore", but Johnny considers her an "angel", and the half-brother of Roark Junior. He is a professional gambler with an uncanny affinity with slot machines, as seen when taking a look on each slot machine at Kadie's before playing with one, resulting to winnning. He has a similar affinity in handling cards, being able to shuffle a deck with a single hand, and always winning. His confidence in his abilities is such, that even when broke, he just needs a dollar to multiply it by gambling.

He is portrayed by Joseph Gordon-Levitt.

Johnny, a cocky young gambler, arrives in Basin City and heads to Kadie's place, where he immediately hits the jackpot on multiple slot machines. Taking a young waitress, Marcie with him as a good luck charm, he buys into the backroom poker game lead by the all-powerful Senator Roark. Johnny repeatedly wins in the high-stakes game, and cleans the senator out. One of the other players, the corrupt police lieutenant Liebowitz warns him to get out of town, but instead Johnny takes Marcie out for a night on the town. He is walking her home when he is attacked by Roark's goons. He fights them off and tells Marcie to meet him at a hotel before he is escorted into a waiting car. The Senator is waiting for him. In payment for the humilation he suffered at the card game, Roarke takes back his money, then reveals a pair of pliers, which he uses to break three of Johnny's fingers. They toss him from the car and the Senator shoots him in the leg, at which point he reveals that he has recognized Johnny as his illegitimate son, but remarks that he only considered his dead son Roark Junior (who was killed during the events of That Yellow Bastard) his flesh and blood. He leaves Johnny alive, preferring to let him suffer, and Johnny swears revenge.

Johnny visits an unlicensed doctor, Kroenig who shoots up heroin before trading his services for Johnny's last forty dollars and his shoes. Realizing that he has left Marcie unprotected, Johnny flees to her hotel, but finds the Senator waiting for him along with Marcie's dismembered head and hands. Again, the senator lets him go. Intent on taking down Roarke, Johnny is able to scrounge a dollar from a sympathetic waitress Bertha which he uses to regain enough money playing slots to buy his way into Roarke's game the following night. Playing with significantly less confidence, Johnny folds his first few hands, allowing Roarke, who taunts him about his dead mother. He is able to once again con Roark into going all in, and then reveals his winning hand. Johnny taunts his father, reminding him that the story of how he was beaten twice by the same man will follow him for the rest of his life. His vengeance completed, Johnny smiles resignedly as Roarke shoots him in the head, commanding his men to get rid of the body. 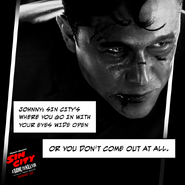 Joseph Gordon-Levitt is Johnny in A Dame To Kill For. 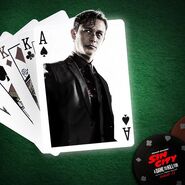 The Ace of Spades is clever. But is he enough to take down Senator Roark? 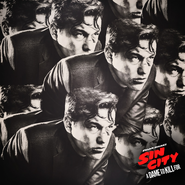 Never gamble with your life. 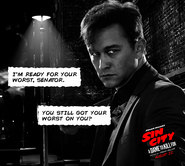 A Dame To Kill For digital postcard featuring Johnny.

This has turned into one long, bad night.

A Dame To Kill For poster. 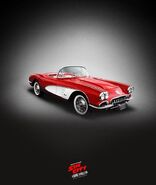 Johnny in The Long Bad Night.

I blow through almost as much cash as I make at the table.

Walking on the deserted streets.

Johnny looks behind him.

He advises a Roark's goons.

Johnny, during the long, bad night.

A dead Johnny.
Community content is available under CC-BY-SA unless otherwise noted.
Advertisement