What's on your mind?

You know those four frat boys that set a guy on fire and Marv kills them at the beginning of Sin City 2?

I think the two longest-lasting ones are called Flint and Buzz, coz their names in the credits are listed before "Frat Boys 3 and 4", and the credits don't list a "Frat Boys 1 and 2", so I'm guessing Frat Boy 1 (whose throat is slit by Marv) is Flint, and Frat Boy 2 (who gets hanged) is Buzz, who is played by Shakey Graves though I haven't seen him enough to recognize him every time, but I do think he looked like him, and rewatching it, picked out which one I thought he was.

This is the place to talk about your favorite topic, to share news, theories, ideas, and to connect with others. The content from your Forum has been converted to Discussions posts, so nothing has been lost.

To learn more about what you can do here, check out community.wikia.com/wiki/Help:Discussions

If you're an admin on this community, read more about how you can customize your Discussions and set up guidelines for contributors: community.wikia.com/wiki/Help:Admin_and_Moderator_Tools_in_Discussions

"Actor Powers Boothe, known for his roles in "Sin City," "Agents of S.H.I.E.L.D," and "Deadwood," has died at 68, his publicist, Karen Samfilippo, said.

The Emmy-winning actor passed away Sunday of natural causes in his sleep at his Los Angeles home."

"A private service will be held in Texas where he was from."

Powers Boothe was such a great actor and a fantastic edition to the franchise. May his soul rest in peace.

Hi, I'm a founder of Polish wiki about Sin City. Can I take your logo for my database?

Hey, anyone interested in helping with a project I'm working on?

I'm working on a tactical-combat tabletop system (think Jagged Alliance translated to pen and paper games), and I decided a good start would be to build a setting around Sin City - I love the comic and films alike, especially their atmosphere.

So far, I've got one map/battle (Ava Lord's Manor) planned out for my players to test, but I'm having trouble filling the rosters. Basically, every team is a Fireteam Commander (a full player character) and five Grunts (heavily simplified characters for easy usage) - this particular setup doesn't have a Commander, just six Grunts, on one of the sides. (Grunts are designated as a Class, and you can only have one of a Class, but there are ten classes, so choice is key.)

Team Lord is obviously Ava Lord as the Fireteam Commander, but the only role I can fill for her is Manute as a Juggernaut or Enforcer (probably Juggernaut). Any ideas?

What is the amazing font used on this wiki?

I really want to use it in my documents.

1. It's Pretty Similar to the First One... What's sort of surprising is how similar this "Sin City" installment is to the first film. Visually, it's almost identical, with one notable exception (more on that in a minute). But more than that the feel of "Sin City" -- that rainy, black-and-white gloom that is such a big part of the franchise.

2. ... Except a Bunch of Cast Members Have Been Replaced One of the odder elements of "Sin City: A Dame to Kill For," though, is the fact that so many characters from the original film return, but have been replaced by other actors.

3. The 3D Is Really Terrific "Sin City: A Dame to Kill For" co-director Robert Rodriguez has always been high on 3D.

4. Lady Gaga Has a Cameo

Just thought you should know.

5. Eva Green Continues to Kill It

She's starring in another Frank Miller adaptation, playing another feisty femme fatale, and totally killing it. She is very much a dame to kill for, but does her own killing too. She's stunningly gorgeous, funny, and quite witty, and she slinks around "Sin City" like she's lived there for years.

6. Some of the Stories Are New

Fans of the comic book will still get a kick out of the new material that's been folded into "Sin City: A Dame to Kill For." Two of the four stories are brand-new, and they're both pretty terrific. "The Long Bad Night" features a cocksure gambler (played by Joseph Gordon-Levitt) who runs afoul of villain Senator Roark (Powers Boothe). This story rules. The second new addition to the canon is "Nancy's Last Dance," which follows Jessica Alba's character from the first film as she deals with the fallout of Bruce Willis' death and plots her own revenge against Roark.

Just in case you were curious -- there are still a lot of lobbed-off heads.

8. Not Every Actor Is Comfortable With Rodriguez's Shooting Style At Comic Con this year, Josh Brolin recounted a story from the production of the movie. Rodriguez had wanted Brolin to come onboard "Sin City: A Dame to Kill For" (the two had been friends since Rodriguez shot second unit on Guillermo del Toro's "Mimic," which starred a young Josh Brolin) and was finally able to secure him. When he got to the set, Brolin asked where Mickey Rourke was.

9. Eva Green Is Naked a Lot

10. "Sin City 3" Is Very Much Worth Looking Forward To

Overall, the feeling you get while watching "Sin City: A Dame to Kill" is a good one -- warm, and gooey, like blood trickling down your forehead. The world that Rodriguez and Miller have creative is vivid and engrossing.

(edited by Justinx501)
I dnt remember Marv being injured ... Marv's Uzi jammed ... I think he was just letting her finish off Roark
(edited by administrators)

Ok, this is really bugging me, and I'm hoping to gain some clairity here. Near the end of The Hard Goodbye from the first movie, Marv Drops Wendy off at Nancy's before confronting Roark, where he is shot and arrested. But in the trailer for A Dame to Kill For, Marv is seen with Nancy after she scarred up her face and dyed her hair black. Does this mean from the aforementioned scene in the first film, from when Marv leaves Nancy's to confront Roark, that there is a significant lapse between those two points to allow for the Fat Loss, or did they mess up in the timeline? Thanks for any and all info. 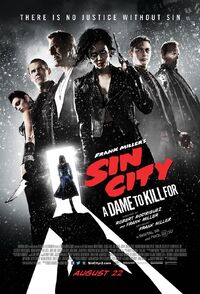 Hold on tight, Sin City fans, because this franchise is making a big showing at Comic-Con this year!

First, Sin City will be at Petco Park for the entire convention! The film's classic cars will be on display at Petco Park parking lot throughout Comic-Con against a 102-foot long Sin City skyline. The cars will will include a 1985 Dodge Diplomat, 1955 Chevrolet Bel Air, 1960 Chevy Corvette, 1959 Cadillac el dorado, 1964 1/2 Ford Mustang convertible and 1949 Cadillac Sedanette. There will also be a Sin City style photo booth, a live DJ every day, and promo giveaways (t-shirts, poker chips, playing cards, mini posters, and books).

Next, there will be a Talent & Filmmaker poster signing at the park on Saturday, July 26 (11:15am - 12:15pm). If you're busy attending some other panel or event at that time, they will be back for more signing on Saturday, July 26 (4:15pm - 5:15pm). For this second signing, head over to the Convention Hall at the Dark Horse booth!

Finally, there will be an official panel on Saturday, July 26 from 2:50pm - 3:50pm. Co-directors Robert Rodriguez and Frank Miller and actors Jessica Alba, Josh Brolin and Rosario Dawson will be present for the official Hall H panel!

For more Comic-Con news like this, head over to Comic-Con Wikia!

There are three new polls on the main page. Please vote !!!

My favorite character is Miho. I love strong female characters and Miho can definitely handle herself.

How excited are for this film??? I can hardly wait.